What is the Absolut Bitcoin Project?

It’s mainly a challenge. Inspired by the iconic Absolut Vodka ads all over the world, (If you’re not familiar with them they’re the one of the most influential and the longest running ad campaign in history,) George Saoulidis is trying to do the same with one other thing that will stand the test of time:

The logo is simple and efficient. Playing around with concepts and ideas, George is building the Absolut Bitcoin project in an effort to make the bitcoin logo as recognizable and as mainstream as possible.

Some ads are literal, others are conceptual, some are complex and others are deceptively simple. Some are obvious, and others require knowledge of some inside joke.

In total, they’re aiming to be iconic.

The Absolut Bitcoin ads are free to use for non-commercial use. You can collect them as NFTs, they’re always 1/1 on each blockchain and they aim to become as collectible as Andy Warhol cans.

If you want to use them for your bitcoin open source project, you’re allowed to do so freely. If it’s for commercial use, please get in touch at contact@georgesaoulidis.com and request a license.

The only original Absolut Bitcoin ads are the ones found on this site and on the @saoulidisg and @absolutbitcoin twitter accounts.

Did you enjoy what I made? Then send me a lightning donation!

No comments to show.

The act of orange pilling comes from the Matrix, when Morpheus presents Neo with a choice, to take the red pill and exit the Matrix, or the blue pill and stay asleep. The meme tries Read more…

Here’s a link where you can download highres files of the Absolut Bitcoin Project and use them however you want. https://www.dropbox.com/sh/io7ejhzhhjbsg9g/AACHrLg8HYqw8mpJ_hZGu6b3a?dl=0 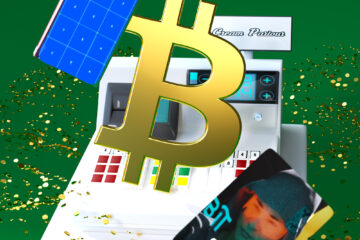